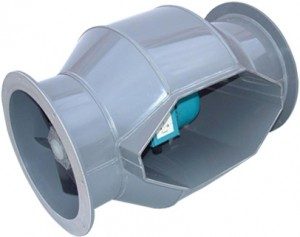 Manufactured to the highest quality bifurcated axial fan from mild steel and hot-dip galvanized the range is available for standard and high-temperature applications. Our bifurcated range delivers a wide selection of air performances, including higher-pressure models. The Bifurcated Axial fan range of fans has been specifically developed to meet the need for an axial fan which can handle atmospheres normally detrimental to the life of the fan motor. Bifurcated Axial Fan range accessories available which include: Axial Ancillary Pack, Attenuation, Wire Inlet Guard, Coupling Flanges, Mounting Feet, AV Mounts and Speed Controllers.

Teral-aerptech bifurcated axial fan motors are specially selected to operate within the motor compartment with the airstream in the duct system, at an elevated temperature. Teral-aerotech motors are of the B3 foot mounting type, totally enclosed and fan cooled and being foot mounted the motors can, in the event of a failure, be readily interchanged with a comparable frame size from a wide range of manufacturers to cover temperatures of up to 200°C. Bifurcated (or bif fans) are inline axial flow fans where the motor has been taken out of the airstream which allows the fan to operate at higher temperatures. They are suitable for medium to high volume applications with low pressure development.